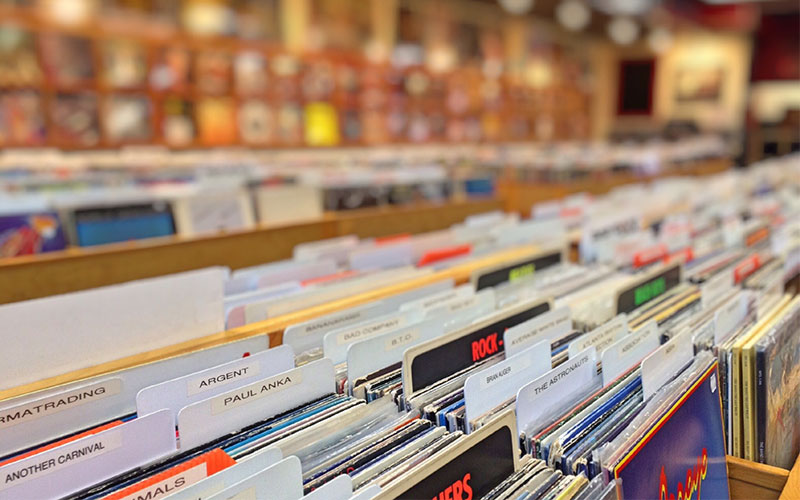 Could 2018 be a better year for music fans? This year alone is the biggest year for vinyl record sales since the 1990s. Not only that, but you can actually visit new local music stores. And not the iTunes kind of music stores, but legit places where you physically enter, listen to tunes, and pick up an album or two. And it’s all thanks to this resurged interest in Vinyl Records!

So that leads to our big question of the day: What is the future of vinyl? Is this only a short lived trend? Or could vinyl actually be here to stay? So join us today as we explore all these important questions. And along the way, you might even learn few interesting facts about vinyl’s impact on the current music industry. So let’s get to it! Let’s see if your vinyl collection is future proof or obsolete in the upcoming years!

If you’ve been tracking record sales over the past few years, there’s no doubt you’ll find your fair share of surprises. First of all, there’s the fact that vinyl charts bring a mix of artists new and old.

Need examples? Then check out last year’s Nielsen record charts. Number one is no surprise Sgt Pepper’s Lonely Hearts Club Band by the legendary Beatles. But move down the top ten list and you’ll find albums from Ed Sheeran, Amy Winehouse, Michael Jackson, and even current sound tracks like Guardians of the Galaxy. That’s quite the mix. In fact, it downright proves that record collecting attracts music fans of all generations.

But what’s more surprising than that is how vinyl has grown in the past 10 years. Ever since 2007, you’ll find that vinyl is steadily making its way back into the mainstream. And in 2014, vinyl record sales finally hit the 1 million mark. And for that matter, vinyl contributed to 14% of all physical album sales in 2017—that’s 2% of the UK’s music market. And for that matter, throughout 2017, Nielsen reported a 9% sales growth of vinyl. So that alone should be a promising stat for the future of vinyl records.

And while the above numbers sound impressive, keep in mind that a bulk of record sales come from local mom and pops music stores. This is important to note since a majority of these businesses don’t report their sales. So with that said, vinyl records are growing at an even faster rate than current stats imply.

We can drone on about the stats of record growth all day long if you’d let us. Seriously, there’s plenty more data and studies out there supporting the claim that sales are growing rapidly. But you probably get the idea by this point. So then, let’s explore the reasons for this growth.

Overall, it’s a pretty simple reason. Records are the trend of the day. There’s something cool about the look of vinyl. And collecting all of your favorite albums gives this hobby a “gotta catch ‘em all” approach. In other words, searching flea markets and record stores for your favorite artists is downright addicting. And if you want to add an extra layer of fun, try getting all your albums signed by their respective artists. It definitely grants you a few cool points while adding a touch of sentiment to your favorite albums.

When you digitize music, you’ll sacrifice a few frequencies in the process. This means that you’re not hearing your favorite songs the way the producers and recording artists intended. But vinyl records teamed up with a decent sound table and set up speakers fix this problem entirely. So if you’re a true music lover, this is undoubtedly the perfect listening format for you.

This point kind of goes along with collections, but buying an album is a feeling like none other. For starters, you get an awesome artwork sleeve that you can use as actual artwork in your home and entertainment rooms. But more than that, there’s an ecstatic feeling of slowing peeling that shrinkwrap from a vinyl record’s sleeve. Next, there’s that unmistakable aroma that the vinyl album emits once you pull it from the sleeve. And to finish it all off, you physically hold that 12” disc in your hands. It’s simply a fun feeling that digital purchases can’t provide.

The above points are great and all. But a grand bulk of today’s generation would never have even gravitated toward records had it not been for the first Record Store Day back in 2008. In fact, let’s delve a bit more into this. In short, this is the day that saved local music stores and helped shape the music industry we know today!

Let’s travel back in time for a second. Back to the days when digital music became a mainstream thing. Music fans discovered a new way of buying their favorite songs for 99¢ from the comfort of their homes. So why even venture out to your local music stores. Or for that matter, sites like Limewire and Napster’s early days gave a “free,” albeit not completely legal, means of getting music. So, as you’d guess, this drove a knife pretty deep into the sales of local music stores.

So, how do you fix such a problem? Kids these days won’t leave the house for anything. And now, they can get any song they want on their computer at any time. That’s certainly no incentive to visit an independent music store.

Thankfully, in 2007, a few people came up with a cool new idea called Record Store Day. In theory, it was something that would celebrate people’s love of music. So these independent stores would sell classic vinyl records. And in the process fans could hang out with local music arts—maybe even get a record signed in the process.

In reality, this festival was bigger than ever imagined when it first occurred in 2008. Legendary bands like Metallica even joined in on the fun. How could any music fan say no to that?

The end result was a pretty huge sale in vinyl records. 10,000 alone sold that year. And since, sales have grown more than 40 times that amount!

Today, Record Store Day has grown immensely. It’s now a $10 million festival that attracts mainstream artists from all parts of the world. And what a reverse in trends it’s brought about. Before 2007, local music stores were calling it quits by the day. But now, the amount of independent music stores grows every year!

That’s certainly a favorable 180 for music and vinyl lovers. Even Universal Music Sales manager Marc Fayd’Herbe mentioned how this event is the best thing that could have ever happened for local mom and pop music stores.

So there you have it! At the end of the day, vinyl records are one of the biggest players in saving independent music stores from going extinct!

No other medium of music brings about the sound of a vinyl record. And not only do these discs produce some great sound, but they’re pretty addicting to collect as well!

Today, record sales are growing by the minute. And if you look at recent trends, there’s no doubt these sales will continue rising for the next few years. So with that said, record collecting is definitely a future proof hobby. And don’t forget to join the fun of Record Store Day next year! By doing so, you’re not only going to have some fun hanging out with local artists, but you’re also helping to keep independent music stores alive and strong. You can’t argue with helping your local economy!